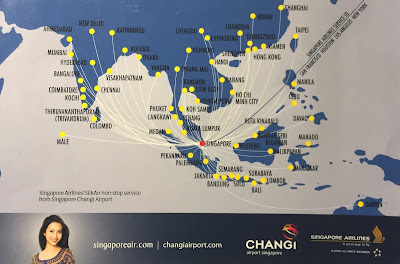 From a global business traveler magazine back cover, Singapore Airlines, Silk Air and Changi Airport partner to boast of the easy connections from Manila to Male, Denspasar to Delhi. While the routes fan upwards toward mainland and offshore China, they do not attempt to show Korea or Japan, but instead link a dozen cities each in India, Indonesia and Southeast Asia, many of which are in fact served by the little sister carrier, SilkAir.

Most notably dating the advert is the list of long-haul routes: San Francisco, Houston, Los Angeles and New York. While all four cities are served from Singapore, none are nonstop nowadays, as the ultra-long haul A340 flights were discontinued at the end of 2013. Today they are paired Houston-Moscow, Los Angeles-Tokyo, New York-Frankfurt, and San Francisco with both Seoul and Hong Kong.