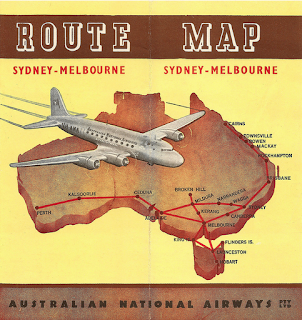 A DC-4 zooms across the dry expanse of the antipodean continent in this vintage route map of the long-gone Australian National Airways. The quad-motor Douglas aircraft only entered the fleet after World War II, and shortly before the airline's demise in a fiercely-competitive market. Although this pamphlet highlights the major national route, Sydney-Melbourne, in red, the airline stretches from Cairns in northern Queensland to Hobart in Tasmania and extends from Adelaide to Perth via the outback station of Kalgoorlie. The remnants of its operations were later folded into Ansett in the mid-1950s.