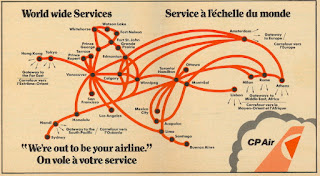 CP Air also connected all its international gateways, except Montreal, to Honolulu, from whence it plunged far south to Antipodea. CP Air's Pacific operations, shown above, will be detailed in the following post.