Hainan Airlines and Hong Kong Airlines: Some of the Routes Operated, 2012. 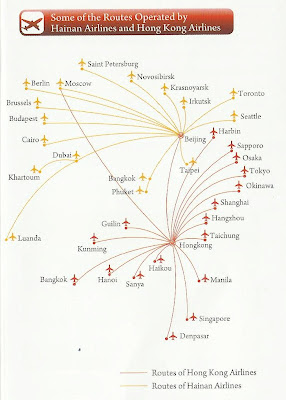 A map of "some of the routes" from Hainan Airlines's most-recent timetable, showing its services to Europe, Asia, Africa and North America, with a second array of more regional routes of Hong Kong Airlines from Chep Lap Kok, which are detailed in the next post.

Note that the airlines only overlap at Beijing, Moscow, and Bangkok, but that the latter is shown twice in a layout which only approximates the true geographic relations of the destinations.