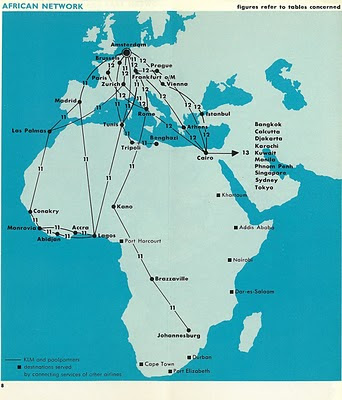 A very detailed map of KLM's African routes in 1966, showing the particulars of its network, with numbers referencing a corresponding timetable page.
The Royal Dutch routes were thinner many decades ago than it is today, with only eight cities south of the Sahara, and the most activity along the West African coast between Conakry and Lagos.
Particularly enlightening are the southern European stop-over points: Zürich, Rome, Madrid, Las Palmas, and Tunis. Cairo, connected to Amsterdam by a number of European cities, served as a gateway to the Asia and Australia.
A single trans-African route flew from Rome-Kano-Brazzaville-Johannesburg, which has been featured on Timetablist previously.